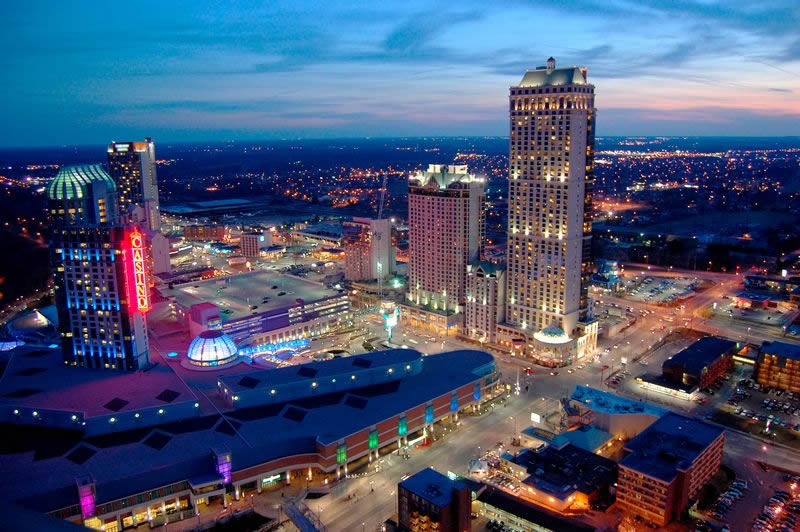 The Hilton Niagara has been a significant landmark on the Niagara Falls skyline since its opening in 2000; at that time the tallest of the Fallsview Hotels. The Hilton was the first to bring a new concept to Niagara’s flourishing hotel industry; a 33-storey hotel tower housing 500 luxury guest suites, an exquisite roof top dining room, with an amazing view of the Falls; and the first indoor water park, complete with a 3-storey waterslide, various pools, hot tubs, and a massive whirlpool all under a huge tent like, semi-translucent roof. In response to the consumers continually growing appetite for high quality hotel experiences and the opening of Fallsview Casino Resort, across the street, the Hilton owners embarked on a massive redevelopment of the hotel in 2005. The new Hilton would be a themed hotel, similar to the type of hotels we experience in Las Vegas; with the completed development boasting:

To develop the concept, the owners retained the services of HFA, an internationally acclaimed Californian concept firm that took the owner’s “Tuscan Village” idea and turned it into a reality – see the original hand sketch by HFAI, dated June 2005 and compare it to the 3-D model developed by the project architect. It’s interesting to see how the original concept was interpreted by the local design team. Following completion of the concept design for the entire redevelopment of the site; the project was broken into two phases due to the availability of financing and scheduling issues; this created two major sub phases. Phase 1 would be the new 53 storey tower, housing 500 new guest suites, a 520 car parking garage and 3 restaurants; with phase 2 being the balance of the work. Financing was arranged and construction of the $100,000,000.00 plus phase 1 commenced in February of 2007. Just 28 months later, the new tower, parking garage, and restaurants were opened to the public. Phase 2, the final phase of the redevelopment, valued at approximately $65,000,000.00 is currently underway, and more project information can be found by clicking here.